The latest round of food testing compares Nima Chemistry to R-Biopharm’s 7001 kit. We did a ton of testing – 47 different items, with a sample going to each lab for comparison.

You can see the piles of food we prepped for shipping out for testing. 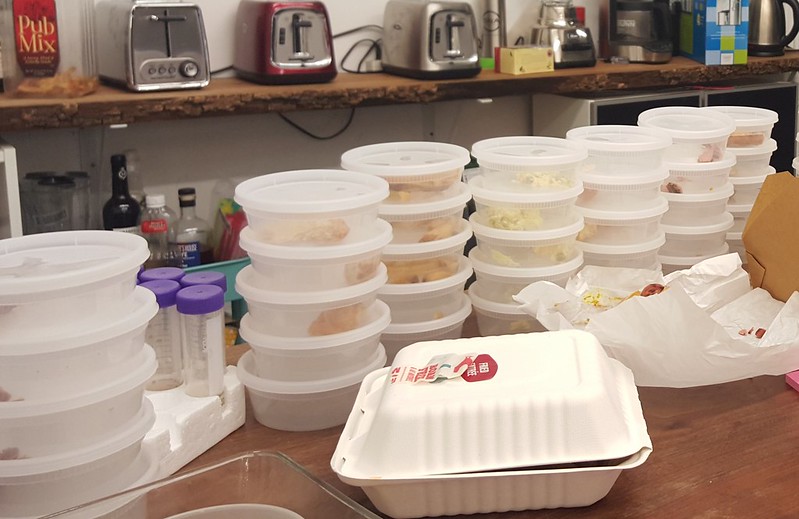 Often, when people first hear about Nima, they say, “You have to be kidding me!” or, “Is it real? Please, let it be real.”

The second question we usually get is, “Does it work?”

We’re working hard to conduct external third-party validations of Nima so that you know not only does it work but also the level of sensitivity of the system.

Nima is designed to be 99.5 percent accurate at 20 parts per million of gluten. We conduct on-going food testing to provide feedback on our accuracy, and this time, we compared our chemistry to a leading antibody, using outside laboratories to conduct the comparisons for us.

This post explains what we tested, how we tested it and the results from the external labs versus Nima’s chemistry.

What did we test?

We compiled a set of 47 food items for testing, ranging from packaged foods to gluten-free items ordered at restaurants. Out of 47 foods, 25 were restaurant foods and 22 packaged goods.

Twenty-five restaurant items were ordered and selected for inclusion based on online reviews that had complaints of contamination, items previously ordered by us and tested as containing gluten, or items labeled gluten-free. Restaurant purchases were made by calling or ordering with a note that these food items were for someone with either a “severe gluten allergy” or celiac disease.

For the 22 packaged goods tested, items were chosen based on a few criteria: top items from consumer surveys, inbound requests for testing, online reports of cross-contamination/sickness, items with gluten-free ingredients without a gluten-free label, items that definitely were flagged as containing wheat and things produced on equipment also used for wheat products.

In all cases where cross-contamination or complaints about a food substance exist, they are purely anecdotal and remain unsubstantiated. It is important to review these sources since, until Nima and its app launches, people rely upon others’ reports of sickness to make eating decisions.

How did we sample and test Nima’s chemistry?

We partnered with two labs: Bia Diagnostics, a lab with 30 years in laboratory experience and nearly 20 years in food allergen testing, and BioAssaySystems, a well-known leader in the development of innovative and high-throughput assays and assay kits.

Two samples of each of the items were taken, with one sample sent to Bia Diagnostics and another sent to BioAssaySystems.

Bia tested its samples with the R-Biopharm 7001 kit, an AOAC-approved kit for gluten testing often considered the industry standard. The limit of detection (LOD) for this assay is 2 ppm, and limit of quantification (LOQ) is 5 ppm. What does this mean? For results greater than 5 ppm, there is a high degree of statistical confidence in the absolute value of gluten present. If the level is under 2 ppm, it may or may not contain gluten — there is a much lower level of statistical confidence in the value. As a result, the tests Bia conducted with the R-Biopharm 7001 kit report the actual parts per million for the amount of gluten present when greater than 5 ppm. If the sample contains more than 84 ppm, due to the limited dynamic range of the assay, you will only see >84 ppm and not a specific number in the reporting.

The set of samples tested with Nima’s technology were sent to BioAssaySystems. There, these food items were evaluated using the proprietary sample preparation and the Nima proprietary antibody and assay designed specifically to work with the Nima device. BioAssaySystems reported the results of each test as containing gluten or no gluten detected, just as someone using Nima would see. Each item is reported in the tables below with the indicator someone using the device would see: frown (any gluten detected) or a smile (the sample contains less than 20 ppm of gluten).

Six out of 47 total items (13 percent) contained gluten in some level as reported by Nima and by the R-Biopharm assay. Of the 47 items, only two were expected to contain gluten.

All 25 restaurant items were ordered as gluten-free. Of these, Nima and R-Biopharm each have five reports of gluten contamination. Of these five, only one item exceeded the FDA standard for gluten-free (20 ppm) — and that one item tested at greater than 84 ppm in the quantified results, more than four times the amount considered to be gluten-free.

The packaged foods were more straightforward. Even in cases where food was selected that was not certified or was produced on shared equipment, results between Nima and R-Biopharm both show that no gluten could be detected. For the two items with gluten or wheat ingredients, both picked it up and reported the item as containing gluten.

Both Nima and R-Biopharm results report five items as containing gluten, however, only four items are the same between the two tests. Three items tested as having greater than 10 ppm of gluten with R-Biopharm. Each of these would have reported a frown with Nima. Additionally, one item at 3.6 ppm as identified by R-Biopharm also would have yielded a frown from Nima.

There are two discrepancies between the two tests:

-Sample was 7 ppm with the R-Biopharm test, which Nima labeled as gluten-free: This item qualifies as gluten-free based on U.S. FDA standards.
-One item which Nima labeled as having contained gluten, which R-Biopharm reported as less than 5 ppm: In this case, it’s possible that sampling impacted the results, as in previous rounds of testing from this restaurant, we have found low levels of contamination.